This Halloween, a rare blue moon will appear across all time zones, for the first time in 30 years.

The term Blue Moon is used to describe two different types of moons. The first definition refers to the second of two full moons within a calendar month, the last of which occurred on March 31, 2018.

The second definition is used to describe the third of four full moons within the space of a single season, with the next one due to arise on August 22, 2021. The blue moon we’ll be getting this Halloween however, refers to the first definition and, unfortunately, doesn’t mean the moon will literally be blue.

On Halloween night a rare Blue Moon will be visible across all times zones. It will not shine blue, but the name is given because it is the second full moon to appear in the same month – the first occurs October 1

This happens once every 19 years pic.twitter.com/89ZgcD5ks9

A moon can appear to be blue in colour, however this is a very rare sight, and unusual sky conditions such as ‘certain-sized particles of dust or smoke’ are required, as EarthSky reports.

The astronomy website has warned people against being taken in by pictures that have been doctored by blue filters, which, although eye-catching, aren’t strictly accurate.

Colouring aside, the upcoming blue moon looks set to a beautiful sight wherever you are on the planet, with stargazers throughout North and South America, India, Europe and Asia set to get some spectacular views.

a rare #bluemoon will appear this Halloween night pic.twitter.com/qvTCoqJ9tk

The Blue Moon display occurs seven times every 19 years, and the next one wont be visible worldwide on Halloween until 2039. The last time this happened was in 1944, during the years of World War Two.

No doubt this rare moon will help to create a little more spooky ambience this coming Halloween. 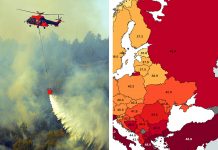 All-Time Hottest Temperature In Europe Expected To Be Recorded Today 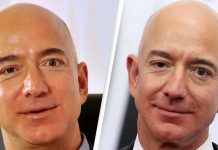