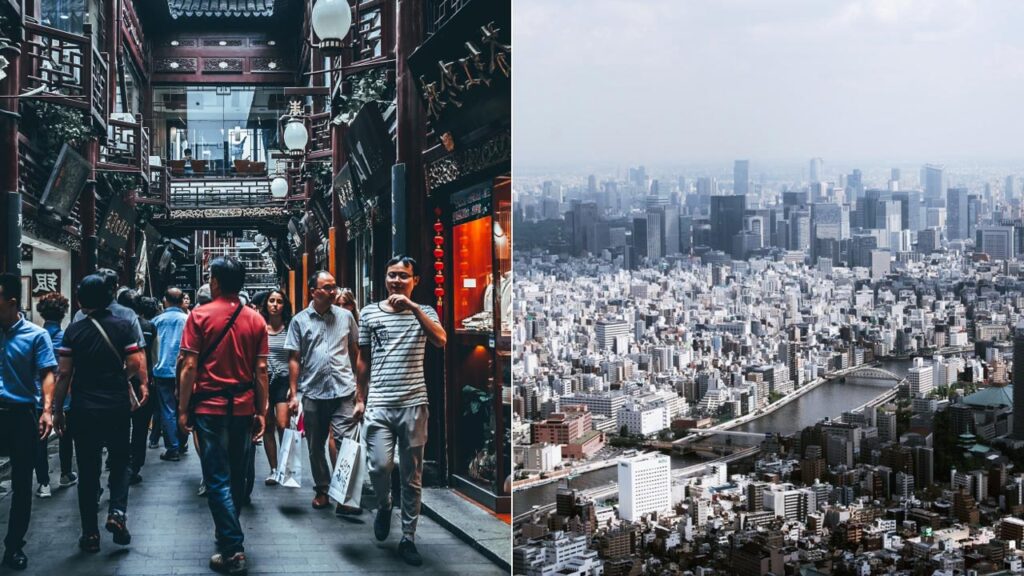 Tokyo is the largest city in the world with a population of 37,435,191. Tokyo is so populated that its population surpasses the country of Canada. Considered to be a city “at the pinnacle of urbanism”, Tokyo is one of the most important trade and industrial centers in the world.

Jakarta is the capital and largest city of Indonesia. It is established on an area of ​​661.52 km² in the northwest of Java Island and has a population of 8.490.000. Jakarta is the economic, cultural and political center of the country. It is the most populous city in Indonesia and Southeast Asia, as well as the twelfth largest city in the world.

Delhi, or the National Capital Territory of Delhi, is India’s most populous city. Besides its impressive size and population of 29,399,141 people, Delhi is also one of the oldest cities in the world. Delhi has been considered an important urban center for much of its history since the 6th century BC.

Manila is the capital city of the Philippines and one of the municipalities located in the Metro Manila area. The city is located on the east coast of Manila Bay on Luzon, the country’s largest island.

São Paulo has the distinction of being the most populous city in all of South America, with a population of 21,846,507 people. On the other hand, it is the largest city in the entire Western Hemisphere and Southern Hemisphere. Located in the state of the same name, São Paulo is a critical urban center with a history of scientific research.

Seoul, or officially the Special City of Seoul, is the capital and largest city of South Korea. The second largest metropolitan area in the world, the Seoul National Capital Area covers most of Incheon and Gyeonggi. About half of South Korea’s population lives in this region.

Mumbai, formerly Mumbai, is the second Indian city in the list of populated cities. With a population of 20,185,064, Mumbai is one of the commercial centers of the world. The city, which was once a colony of Portugal and England, later became a critical location for the struggle for Indian independence. Today Mumbai is home to Bollywood and other cultural industries.

With a population of 22,118,000 people, Shanghai is a global hub for industry, finance, economics, research, science and more. Shanghai, which is among the crowded cities, is the most important port city in China. On the other hand, Shanghai has the provincial system and consists of 19 districts.

Mexico City is the most populous city in all of North America, with a population of 21,505,000. Mexico City, the world’s most Spanish-speaking city, is the oldest capital city in both North and South America. Mexico City was originally founded by the Aztecs as the ancient city of Tenochtitlán. But it was rebuilt under Spanish rule and design. This city contains remnants of both histories.

Guangzhou or Guanco is the capital and largest city of Guangdong Province in southern China. It has 2,200 years of history dating back to the Chinese Dynasty; throughout its history, it has functioned as the political, military, economic, cultural, scientific and educational center of Southern China.

Cairo has the distinction of being the largest city in Africa when the entire region is taken into account. This historical city, which has many artifacts from the ancient Egyptian civilization, welcomes millions of tourists every year. On the other hand, Cairo is known as a modern city with its famous educational and entertainment institutions.

Cairo has the distinction of being the largest city in Africa when the entire region is taken into account. This historical city, which has many artifacts from the ancient Egyptian civilization, welcomes millions of tourists every year. On the other hand, Cairo is known as a modern city with its famous educational and entertainment institutions.

Beijing mega city is the second largest city in China after Shanghai with a population of 19,437,000 people. Because more billionaires live in Beijing than in any other city, it is often described as the billionaire capital of the world. Beijing is the center of culture, finance, economy, business, science and technology; which makes it a cultural and financial center for China and the world.

Kolkata is the capital of the Indian state of West Bengal. It was established 96 km inland from the mouth of Hugli, a tributary of the Ganges river, at the fork of the Ganges and Brahmaputra rivers in the Bay of Bengal. It is the most important port of India. One third of the country’s foreign trade is made from this port.

Moscow is the capital and most populous city of Russia. It has a population of 10,406,578 in the city center. When the suburbs are added, it is home to a population approaching 18 million. Moscow is an important political, economic, cultural and scientific center of Eastern Europe.

Top 10 Clearest Lakes in the World

The 20 Best Monica Bellucci Movies of All Time