The city of Ísafjörður in Iceland has been equipped with special pedestrian crossings. The company Vegi GÍH and the environmental commissioner of the city have imagined an optical illusion that offers a three-dimensional aspect to the white stripes. A characteristic that unfolds according to the angles according to which one observes this creation immortalized by Gusti Productions. Gusti Productions. 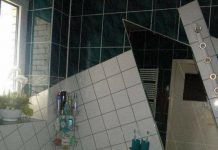 “What Were These Designers Thinking?” 12 Bathroom Designs That Scream Us

How to Find True Happiness